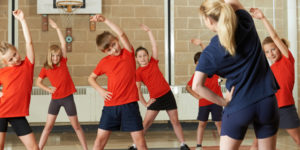 Why is sport such an important part of school life?

It is recommended that 5-16 year olds should be physically active for an hour every day. 90% of primary and secondary schools in the UK currently offer their pupils two hours of sport per week, as part of the Curriculum and through after-school activities. The Independent Schools Council claims that increased participation in extra-Curricular activities has led to better exam results in certain schools. Not only does participating in sporting activities help children stay fit and healthy, it is also a great way of building confidence and helping children to learn new skills, such as leadership and teamwork. PE lessons also encourage children to become more aware of the importance of diet and fitness. Being encouraged to make healthy choices at a young age is instrumental in the battle against childhood obesity.

What sports can children get involved in?

As well as offering traditional sports such as football, hockey, netball and athletics, more and more schools are now offering a much wider range of activities from tai chi, mountain biking and yoga, to boxing, cheerleading and country dancing. These new activities are especially popular with children who aren’t keen on traditional team games and by giving them the opportunity to try lots of different things, they are becoming more eager to get involved.

What is being done to promote sport in schools?

The Government has put £978 million into school sport since 2003, improving the quality of PE teachers and PE lessons as a result. By 2012, the Government wants schools to offer five hours of sport per week to 5-16 year olds. Charities such as the Youth Sport Trust are helping this goal to be achieved by actively promoting PE in schools, with famous sportsmen and women, such as Darren Campbell and Denise Lewis, acting as ambassadors for the cause.